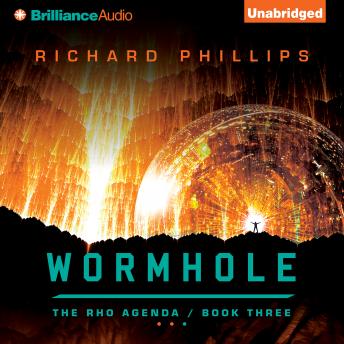 #3 of The Rho Agenda

The world is wrong.

In Switzerland, scientists working on the Large Hadron Collider have discovered a new threat, a scientific anomaly capable of destroying the earth—and only Rho Project technology can stop it. In exchange for a full pardon, Dr. Stephenson agrees to create a wormhole that will send the anomaly into deep space. But his promise masks the alien agenda that brought the Rho Ship to earth.

Now a trio of altered humans, Heather McFarland and Mark and Jennifer Smythe, must infiltrate Stephenson’s wormhole project and stop it, no matter the cost. The ultimate battle has begun and, this time, mankind cannot afford to lose. The final installment to Richard Phillips’s Rho Agenda trilogy brings the epic tale to an explosive conclusion that will echo long past the final page.

This title is due for release on November 20, 2012
We'll send you an email as soon as it is available!