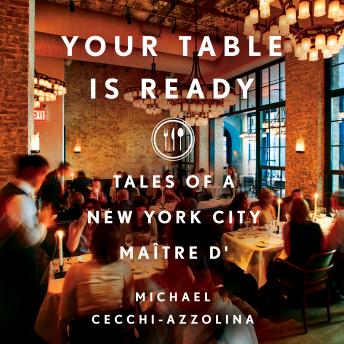 Your Table Is Ready: Tales of a New York City Maître D'

A front-of-the-house Kitchen Confidential from a career maître d’hotel who manned the front of the room in New York City's hottest and most in-demand restaurants.

From the glamorous to the entitled, from royalty to the financially ruined, everyone who wanted to be seen—or just to gawk—at the hottest restaurants in New York City came to places Michael Cecchi-Azzolina helped run. His phone number was passed around among those who wanted to curry favor, during the decades when restaurants replaced clubs and theater as, well, theater in the most visible, vibrant city in the world.

Besides dropping us back into a vanished time, Your Table Is Ready takes us places we’d never be able to get into on our own: Raoul's in Soho with its louche club vibe; Buzzy O’Keefe’s casually elegant River Café (the only outer-borough establishment desirable enough to be included in this roster), from Keith McNally’s Minetta Tavern to Nolita’s Le Coucou, possibly the most beautiful room in New York City in 2018, with its French Country Auberge-meets-winery look and the most exquisite and enormous stands of flowers, changed every three days.

From his early career serving theater stars like Tennessee Williams and Dustin Hoffman at La Rousse right through to the last pre-pandemic-shutdown full houses at Le Coucou, Cecchi-Azzolina has seen it all. In Your Table Is Ready, he breaks down how restaurants really run (and don’t), and how the economics work for owners and overworked staff alike. The professionals who gravitate to the business are a special, tougher breed, practiced in dealing with the demanding patrons and with each other, in a very distinctive ecosystem that’s somewhere between a George Orwell “down and out in….” dungeon and a sleek showman’s smoke-and-mirrors palace.

Your Table Is Ready is a rollicking, raunchy, revelatory memoir.