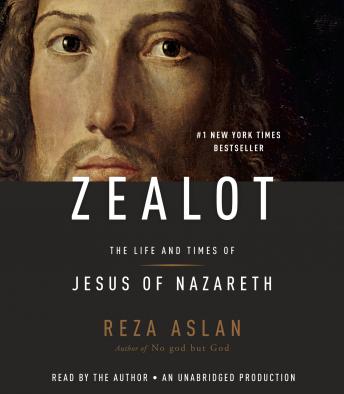 Zealot: The Life and Times of Jesus of Nazareth

Two thousand years ago, an itinerant Jewish preacher walked across the Galilee, gathering followers to establish what he called the “Kingdom of God.” The revolutionary movement he launched was so threatening to the established order that he was executed as a state criminal. Within decades after his death, his followers would call him God.

Sifting through centuries of mythmaking, Reza Aslan sheds new light on one of history’s most enigmatic figures by examining Jesus through the lens of the tumultuous era in which he lived. Balancing the Jesus of the Gospels against the historical sources, Aslan describes a man full of conviction and passion, yet rife with contradiction. He explores the reasons the early Christian church preferred to promulgate an image of Jesus as a peaceful spiritual teacher rather than a politically conscious revolutionary. And he grapples with the riddle of how Jesus understood himself, the mystery that is at the heart of all subsequent claims about his divinity.

Zealot yields a fresh perspective on one of the greatest stories ever told even as it affirms the radical and transformative nature of Jesus’ life and mission.

“Fascinatingly and convincingly drawn . . . Aslan may come as close as one can to respecting those who revere Jesus as the peace-loving, turn-the-other-cheek, true son of God depicted in modern Christianity, even as he knocks down that image.”—The Seattle Times

“[Aslan’s] literary talent is as essential to the effect of Zealot as are his scholarly and journalistic chops. . . . A vivid, persuasive portrait.”—Salon

“This tough-minded, deeply political book does full justice to the real Jesus, and honors him in the process.”—San Francisco Chronicle

“A special and revealing work, one that believer and skeptic alike will find surprising, engaging, and original.”—Jon Meacham, Pulitzer Prize–winning author of Thomas Jefferson: The Art of Power

Fascinating exploration or the historical Jesus.

Absolutely brilliant analysis of Jesus as a historical figure versus a divine being. I also greatly appreciate Aslan’s searing critique of Saul of Tarsus, and Saul’s role in muddying the previous clear teachings of Jesus. Aslan’s discussion on likely tradition passage of early church leadership. Worth it for Christians to understand how the rest of the world views Jesus of Nazareth and how the Bible can be understood in a historical context. Worth it for non-Christians to appreciate the impact Jesus had on human history and the setting of his life and ministry.

Very good insight into the historical figure. Well referenced to actual accounts of life at the time which placed a lot of events in perspective. Good read and we’ll presented

This helped me see things in a new light. Not good or bad, but definitely differently. I enjoyed the new perspective. I’m glad the author narrated.

Excellent narration for an even more splendid book. Objective and straight to the point with zero emotions.

It was a good book however, I think it made some big jumps in conclusions. A lot of very interesting information about the true history but as I stated earlier, I think some points were great leaps of faith. A definite read.

Amazing, simply and utterly amazing. As a modern Jew, this book sheds so much light onto the man we believe to have been a brilliant charismatic prophet of ancient times.

Very interesting and a lot of information. I look forward to reading more and following up on Aslan's great studies by checking out maps and the timeline to try to keep everything straight. It's not easy unwinding the complexities of ancient history.

Great book!! Points out history facts that can't be ignore.

This title is due for release on July 16, 2013
We'll send you an email as soon as it is available!