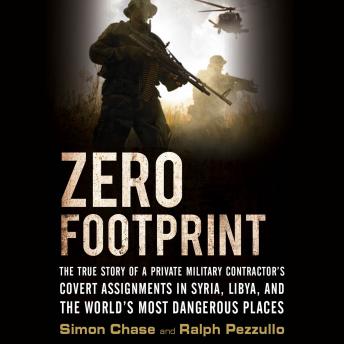 Zero Footprint: The True Story of a Private Military Contractor¿s Covert Assignments in Syria, Libya, And the World¿s Most Dangerous Places

This national bestseller is a dramatic insider account of the world of private military contracting.

Armored cars, burner phones, top-notch weaponry and top-secret missions -- this is the life of today's private military contractor. Like author Simon Chase, many PMCs were once the world's top military operatives, and since retiring from outfits like US Navy SEAL TEAM Six and the UK's Special Boat Service, they have devoted their lives to executing sensitive and hazardous missions overseas.

Working at the request of U.S. and British government entities as well as for private clients, he takes on jobs that require 'zero footprint,' with no trace of their actions left behind. Chase delivers firsthand accounts of tracking Bin Laden in Afghanistan and being one of the first responders after the attack on the U.S. Consulate in Benghazi. We see his teams defuse terrorist bombs, guard dignitaries, and protect convoys traveling through perilous territory -- and then there are the really big jobs: top-secret 'zero footprint' missions that include searching for High Value Targets and setting up arms shipping networks.

The missions in Zero Footprint will shock readers, but so will the personal dangers. Chase and the men he works with operate without government backup or air rescue. If they die serving their country, they remain anonymous. There are no military honors or benefits. Contractors like Simon Chase are the unsung heroes in the war against terrorism, a strong, but largely invisible force -- until now.

Outstanding book! I love how the author is as transparent as he can be given the subject matter. Really makes us appreciate the freedoms we have from those who protect us.

good from start to finish with some story's that were so FUNNY I literally laughed my self into tears, and the other parts bring the tears back but ARE NOTHING TO LAUGH ABOUT.

Found this in the History/Military genre. This is NOT history or factual. There’s many errors in the book that a real special forces operator could never make. For instance. The “M4 viper” he uses is an air soft gun it’s not real! All the action he allegedly sees would make him a walking GI Joe. He even came out to say it was fiction. Very upset I was scammed.

Spoiler Alert: I'm about to comment a specific section of the book so stop reading this now if you wish. Review: it was good and interesting especially the part about Benghazi. I stopped listening to the book when he started stalking his ex girlfriend. Monitoring her calls, tracking her car because she "dared" call him out on his potential mental state. He was "going to prove that she was lying to him". F*** that. Stalking is wrong. The stories of how you stalked her are wrong. I stopped listening. It may have had a happy ending but I'm not silently condoning what he did, so I stopped. Interesting book up until then. I'm a military veteran and appreciate the work PCs do for us.

Exciting, evolving to heart-wrenching, and all the while riveting, this tale is an unexpected gem! A look into one man's life that parallels many. Simultaneously heros and wounded birds, this book highlights how our modern warriors are often poorly understood, and how that disconnect is a loss for everyone.

Thank you Simon for sharing these accounts with us! It was well written and exciting as well as thought provoking. Brought me to tears while listening in the truck at work (although it would be nice to edit out some of the profanity

I wanted to like this book but it just did not do it for me. Some of the stories seemed exaggerated which made the whole thing less than believable for me. I gave it a 3 being generous. The narrator was pretty good though and very animated.

Great book. A range of emotion. From full laughter to holding back tears. The Narrator did a fantastic job

I thought this book was pretty awesome, narrator was great; an emotional roller coaster for me. Great look into the world of private contracting.

Great narrator! Very detailed of each story...I feel as if I was there.

This title is due for release on January 12, 2016
We'll send you an email as soon as it is available!