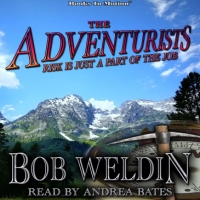 This adventure novel begins in an old underground mine in the North Cascades of Washington, next to the Canadian border. Danger, romance and intrigue follow Sara and Brad through the Idaho Primitive Area and the treacherous canyon of the Middle Fork of the Salmon River. They sometimes stray from their work plans to search for a lost gold mine or prospect for gemstones in the rugged Sawtooth Mountains of Idaho. It's the summer of 1967, a time before GPS, cell phones or laptops. The geologists work in pairs but frequently have to split up to cover more territory. They carry Brunton compasses, which are used to map mineral deposits, but in their case sometimes used to find their way back to camp or to the nearest road out to civilization. The Adventurists is a sequel to The Dry Diggins Club. The main protagonists, Sara Mullins and Brad O'Connor, characterize two of the many government geologists charged with determining if valuable minerals occur in primitive or wild U.S. Forest Service lands being considered for inclusion in the U.S. Wilderness System.

This title is due for release on July 22, 2021
We'll send you an email as soon as it is available!