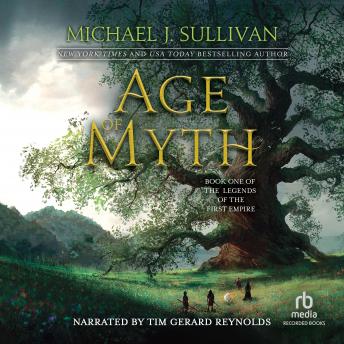 #1 of Legends of the First Empire

Michael J. Sullivan's trailblazing career began with the breakout success of his Riyria series: full-bodied, spellbinding fantasy adventures whose imaginative scope and sympathetic characters won a devoted readership and comparisons to fantasy masters Brandon Sanderson, Scott Lynch, and Tolkien himself. Now, Sullivan's stunning hardcover debut, Age of Myth, inaugurates an original five-book series--and one of fantasy's finest next-generation storytellers continues to break new ground. Since time immemorial, humans have worshipped the gods they call Fhrey, truly a race apart: invincible in battle, masters of magic, and seemingly immortal. But when a god falls to a human blade, the balance of power between men and those they thought were gods changes forever. Now, only a few stand between humankind and annihilation: Raithe, reluctant to embrace his destiny as the God Killer. Suri, a young seer burdened by signs of impending doom. And Persephone, who must overcome personal tragedy to lead her people. The Age of Myth is over; the time of rebellion has begun.

This is a really solid start to a series, with good character development with an interesting plot. The author take a rather linear approach to the story and comes to the climax without to many points stalling but without a whole lot happening. Never the less it is an enjoyable read/listen. There are a few eye rolling moments that seem a little hooky even for the genre (which I personally love), the lead male role is a little bland and the antagonist is weak (and probably the least enjoyable story line to follow). The classic fantasy elements are present, there are some really enjoyable protagonist, and the writing as a whole is applaudable. If you are a fan of the genre this is one to check out, if it is your first dabble into it there are other series which are staples you should check out to get you hooked first.

I am a big fan of Michael J Sullivan work. I enjoy reading the Ryia revolution and from there I fell in love with his work this book was absolutely a journey Which was worth of my time

Great story. Loved the build up of characters. The reader didnt do a great job of different voices but was ok.

Great action and story. You will not be disappointed.

Great book and foundation for the next 3. I have not enjoyed many series of books how i enjoyed this one really impressive

Appreciate the imagination!!!! Wonderful story telling and the narrator brings to whole story to life!!!

This narrator is one of my favs. He does an awesome job. Great story but took me a little longer to get into it as I struggle with remembering who’s who and places when they are all called odd names. Unlike his Riyria series that had regular names. But I figured out what and who mid way. Looking forward to the next book.

I’m so happy I randomly found your books on here. This new series is super enticing and captivating.

I just could not appreciate this book and not sure why, could not finish listening....

This, This right here was my introduction to Michael J. Sullivan. And it is a marvelous story. I enjoyed the narrator, especially with his acting of Malcolm. That alone is worth the credit to listen. The teamwork of the story and storyteller makes this journey an amazing one to go on. If you want to start a journey in a world that is both what you've heard before with a new kind of twist, this is a great place to start. I promise that it is both small enough to keep track of while being bigger than you could hope for.

I applaud the author for creating a story about the origins of the world he created.

I became a fan of the Ryira (spelling)? Chronicles. I’m amazed by Michael Sullivan’s imagination. It naturally followed that I would read this series as well, and I enjoyed it. This is just the first book, but a preview of the second was included. I’ll get to it as well.

great character build up, cannot wait to see what comes next with Suri

A great new book to start off a new series.