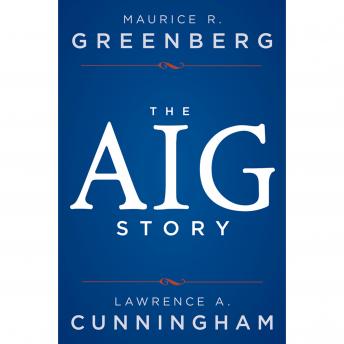 In The AIG Story, the company's long-term CEO Hank Greenberg (1967 to 2005) and GW professor and corporate governance expert Lawrence Cunningham chronicle the origins of the company and its relentless pioneering of open markets everywhere in the world. They regale readers with riveting vignettes of how AIG grew from a modest group of insurance enterprises in 1970 to the largest insurance company in world history. They help us understand AIG's distinctive entrepreneurial culture and how its outstanding employees worldwide helped pave the road to globalization.  Corrects numerous common misconceptions about AIG that arose due to its role at the center of the financial crisis of 2008. A unique account of AIG by one of the iconic business leaders of the twentieth century who developed close relationships with many of the most important world leaders of the period and helped to open markets everywhere Offers new critical perspective on battles with N. Y. Attorney General Eliot Spitzer and the 2008 U.S. government seizure of AIG amid the financial crisis  Shares considerable information not previously made public  The AIG Story captures an impressive saga in business history--one of innovation, vision and leadership at a company that was nearly--destroyed with a few strokes of governmental pens. The AIG Story carries important lessons and implications for the U.S., especially its role in international affairs, its approach to business, its legal system and its handling of financial crises.