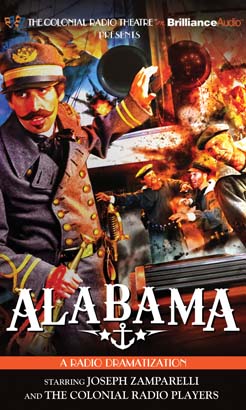 In the tradition of classic radio plays, with a full cast, music, sound effects, all digitally recorded, the award winning Colonial Radio Theatre On The Air is proud to present this spectacular production - 'ALABAMA!' - the story of the famed Confederate Warship and scourge of the Union shipping fleet during the American Civil War. Built in secrecy for the Confederate States Navy in England, she captures or burns 65 Union vessels and takes more than 2000 prisoners in her short career – which comes to an end off the coast of Cherbourg, France, when she encounters the USS Kearsarge.