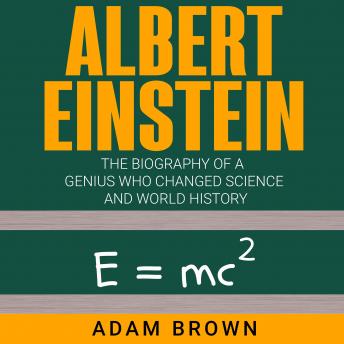 Albert Einstein: The Biography of a Genius Who Changed Science and World History

Jim D. Johnston
A free trial credit cannot be used on this title

While his early childhood was unimpressive, Einstein later earned the respect of the entire world and won the coveted Nobel Prize. His name is the most revered in physics. Even though he was a well-respected genius, Einstein mingled freely among ordinary folk, just as easily as he did scholars and politicians. And while Einstein had a great sense of humor, he was also a bit reckless in the way he led his personal life.To truly appreciate this brilliant scientist, who, at the age of 26, wrote the scholarly articles that fundamentally altered the foundation of physics, it is first important to look at his background and the environment in which he grew up in. Interestingly, while Einstein’s performance in math and physics was outstanding, he was not the only one in his family with a brilliant mind. His father also had an inclination towards mathematics, and his sister earned a doctorate in literature.

This title is due for release on March 8, 2020
We'll send you an email as soon as it is available!