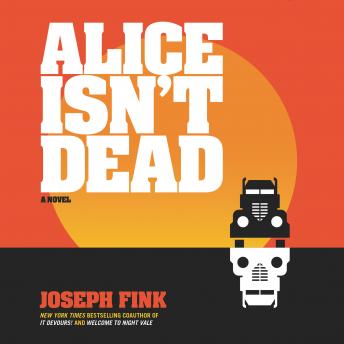 From the New York Times best-selling coauthor of It Devours! and Welcome to Night Vale comes a fast-paced thriller about a truck driver searching across America for the wife she had long assumed to be dead, performed by the voice of the Alice Isn’t Dead podcast, Jasika Nicole, with an exclusive essay written and read by Joseph Fink.

Keisha Taylor lived a quiet life with her wife, Alice, until the day that Alice disappeared. After months of searching, presuming she was dead, Keisha held a funeral, mourned, and gradually tried to get on with her life. But that was before Keisha started to see her wife, again and again, in the background of news reports from all over America. Alice isn't dead, and she is showing up at every major tragedy and accident in the country.

Following a line of clues, Keisha takes a job as a long-haul truck driver and begins searching for Alice. In pursuit of her missing wife, she will stumble on a forgotten American history of secret deals and buried crimes, an inhuman serial killer who has picked her as his next target, and an otherworldly conflict being waged in the quiet corners of our nation’s highway system--uncovering a conspiracy that goes way beyond one missing woman.