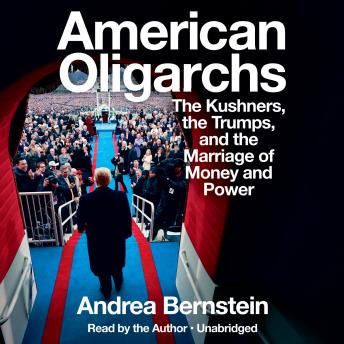 American Oligarchs: The Kushners, the Trumps, and the Marriage of Money and Power

A multigenerational saga of two families who rose from immigrant roots to the pinnacle of U.S. power that tracks the unraveling of American democracy.

In American Oligarchs, award-winning investigative journalist Andrea Bernstein creates a vivid portrait of two emblematic American families. Their journey to the White House is a story of survival and loss, crime and betrayal, which stretches from the Gilded Age through Nazi-occupied Poland to the rising nationalism and inequality of the twenty-first century.

Drawing on hundreds of interviews and over 100,000 pages of documents, many previously unseen or long forgotten, Bernstein traces how the families grew rich on federal programs that bolstered the middle class, and then sheltered their wealth from tax collectors. Wielding half-truths, secrecy, and media manipulation, they blurred the lines between public and private interests, then leveraged political, prosecutorial, and judicial power to avoid legal consequences. At once intimate and sweeping, American Oligarchs reveals how these dynasties encouraged and profited from a system of political dark money that has pushed America to the precipice of oligarchy.

American Oligarchs: The Kushners, the Trumps, and the Marriage of Money and Power