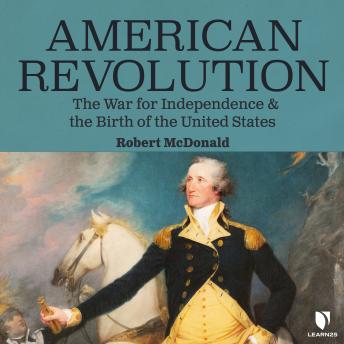 American Revolution: The War for Independence and the Birth of the United States

The American Revolutionary War has inspired bestselling books, iconic paintings, and hit Broadway musicals. More than 250 years after the "shot heard around the world" was fired in Concord, we remain fascinated by the causes and legacy of the Revolution.

In 18 dynamic audio lectures, West Point history professor Robert McDonald leads you past the politics and battle tactics to explore the underlying ideas that sparked the Revolution. The editor of The American Revolution: Core Documents (Ashbrook Center, 2016) and writer or editor of numerous books about the Founding Fathers, Prof. McDonald has an encyclopedic knowledge of the complex factors that made the Revolution much more than a war for independence.

Under his guidance, you'll examine American history from the establishment of Britain's North American colonies through the ratification of the Constitution. Although you'll revisit famous events like the French and Indian War, the Boston Massacre, and the First Continental Congress, this course invites you to reconsider the wider context-political, religious, and economic-of the Revolution.

Throughout the series, you'll entertain questions without easy answers. How can we be sure that it was the Revolutionary War and not something else-like the Enlightenment-that was driving change across the landscape? How did the new land of liberty approach the issues of slavery and women's equality?

Join Prof. McDonald for a fresh and exciting take on the classic story at the heart of the United States of America.

This title is due for release on March 18, 2019
We'll send you an email as soon as it is available!