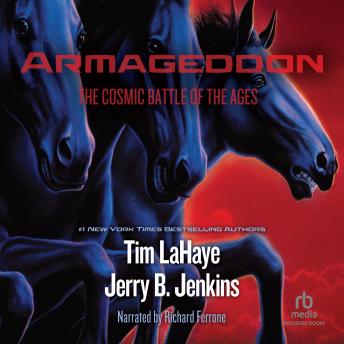 Armageddon-the thrilling eleventh book in the best-selling inspirational series of all time, with over 40 million copies in print-continues the sweeping, apocalyptic saga of the end times on planet earth and reaches new heights with a story listeners will never forget. Beginning with the sudden disappearance of millions of people-the fulfillment of the Rapture foretold in the Bible-authors Tim LaHaye and Jerry B. Jenkins skillfully mix biblical prophecy and current events into a series that keeps fans everywhere eagerly awaiting the next installment. It is the final year of the Great Tribulation. The Tribulation Force is holding out in their San Diego safehouse, but in reality, there is no place left that can be called safe. All the world's remaining armies have gathered in the Middle East, poised for the battle of the ages and preparing for the mighty beasts of the apocalypse. The wasted shell of once-beautiful planet Earth has been reduced to a ticking time bomb, staggering under the weight of judgements from heaven. Mankind is hurtling toward the Battle of Armageddon and the ultimate showdown between the forces of good and evil. Who will survive at the end of the world? Find out in the earth-shaking climax to the Left Behind saga. Recorded Books is proud to offer the only complete and unabridged recording of Armageddon available on audiobook, featuring a suspenseful reading by narrator Richard Ferrone.

Armageddon had me wanting to read more and more I didn't want the book to end. The narration was impeccable. I can't wait to start the next book.

This title is due for release on December 5, 2003
We'll send you an email as soon as it is available!