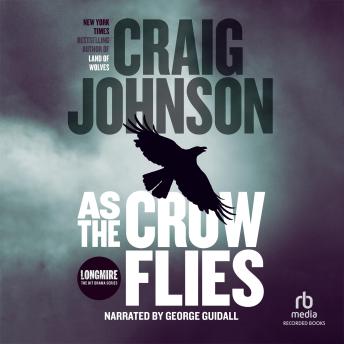 As the Crow Flies

Embarking on his eighth adventure, Wyoming Sheriff Walt Longmire doesn't have time for cowboys and criminals. His daughter, Cady, is getting married in two weeks, and the wedding locale arrangements have just gone up in smoke signals. Fearing Cady's wrath, Walt and his old friend Henry Standing Bear set out for the Cheyenne Reservation to find a new site for the nuptials. But their expedition ends in horror as they witness a young Crow woman plummeting from Painted Warrior's majestic cliffs. Is it a suicide, or something more sinister? It's not Walt's turf, but he's coerced into the investigation by Lolo Long, the beautiful new tribal police chief.

really good had everyone in it and was just a good time. as always George was great reading.

This title is due for release on May 15, 2012
We'll send you an email as soon as it is available!