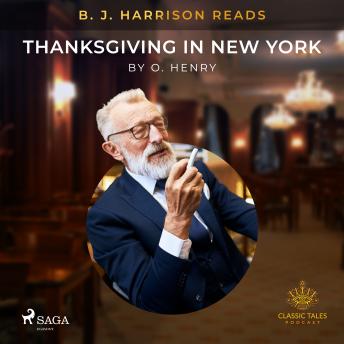 It is Thanksgiving day. Stuffy Pete has just come out from an unexpected feast but he is now waiting for his companion, 'The Old Gentleman'. They only ever meet on this one day of the year, and although they do not know that much of each other, they always spend the holiday together. Stuffy Pete follows the tradition although he is so full that he cannot think of eating more food. The Old Gentleman shows up and they head out to a fancy restaurant for a delicious meal. When Stuffy Pete walks out of the restaurant, he collapses on the sidewalk. The same happens to the Old Gentleman. What happened to them and what is the reason for their fainting? Find out in 'Thanksgiving in New York'.
B. J. Harrison started his Classic Tales Podcast back in 2007, wanting to breathe new life into classic stories. He masterfully plays with a wide array of voices and accents and has since then produced over 500 audiobooks. Now in collaboration with SAGA Egmont, his engaging narration of these famous classics is available to readers everywhere.
William Sidney Porter (1862-1919), known simply as O. Henry, was a prolific American author of humorous literary pieces. His fame came exceptionally quickly and he became a bestselling short story author. Among his most famous stories are the 'Cabbages and Kings', 'The Voice of the City', and 'Strictly Business.' As a result of the outstanding literature legacy O. Henry left behind, there is an annual American award named after him, which is granted to exceptional short stories.

This title is due for release on September 2, 2021
We'll send you an email as soon as it is available!