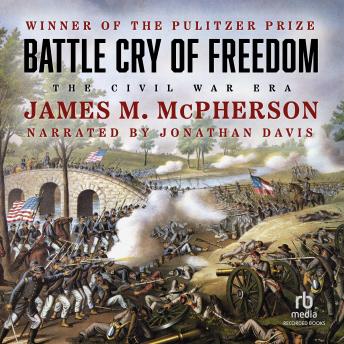 James M. McPherson, professor emeritus of U.S. history at Princeton, is one of the foremost scholars of the Civil War. In this informative and meticulously researched masterpiece, he clarifies the differing ways of life and philosophy that led to this shattering conflict. Abraham Lincoln wondered whether "in a free government the minority have the right to break up the government." Jefferson Davis felt "forced to take up arms" to guarantee his states' rights. McPherson merges the words of these men and other political luminaries, housewives, and soldiers from both armies with his own concise analysis of the war to create a story as compelling as any novel. Battle Cry of Freedom vividly traces how a new nation was forged when a war both sides were sure would amount to little dragged for four years and cost more American lives than all other wars combined. Narrator Jonathan Davis' powerful reading brings to life the many voices of the Civil War