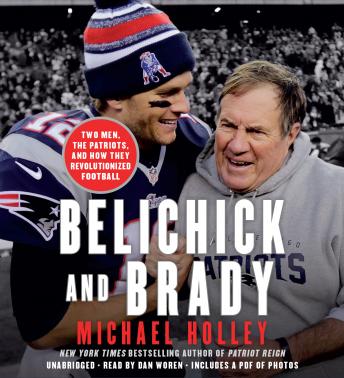 Belichick and Brady: Two Men, the Patriots, and How They Revolutionized Football

New York Times bestselling sportswriter Michael Holley takes readers behind the scenes of the relationship that transformed the Patriots from a middling franchise to the envy of the NFL.

No head coach-quarterback pair has been more successful in NFL history than Bill Belichick and Tom Brady of the New England Patriots. They have won four Super Bowls, six AFC championships, and thirteen division titles. And now Holley takes us inside their relationship, dissecting how these men and their team came to dominate football.

Belichick, a genius as a defensive coordinator, had been a five-year flop as head coach of the Cleveland Browns. Upon his controversial arrival in Foxboro, though, he quickly began to remake the team at every level--scouts, coaches, and players. His bold, calculated approach had fans up in arms, sportswriters questioning his intelligence, and players wondering how long they would last on the team.

Meanwhile, buried down in the 2000 NFL draft, the 199th overall pick was a skinny kid from the University of Michigan named Tom Brady who many scouts thought would never succeed at a professional level. The lowest of the four quarterbacks on the team's depth chart, he appeard to be just one of the guys. Like Belichick, though, he lived for football, and he knew the playbook as well as Drew Bledsoe, the franchise quarterback. And when Bledsoe was injured in 2001, Brady took the job and vowed to never give it back.

The handsome Brady became a star, wearing hand-tailored suits, appearing in movies and on magazine covers, and marrying a supermodel. Belichick, with his trademark cut-off hoodies, was the opposite of a fashion plate. Together, the odd couple somehow rose above controversies and tragedies. Draft picks were lost, suspensions given, lawsuits filed. As their legends have grown, so have their critics, with some of those critics operating from NFL headquarters. Despite that, with Belichick's deft and brilliant strategy in the draft year in year out and Brady's exacting decision-making on the field, the Patriots cultivated an atmosphere of success and won a stunning 75 percent of their games together. Respected and reviled, Belichick and Brady have set the bar high for excellence in a league designed for parity. They have rarely been understood. Until now. Based on dozens of interviews with former and current players, coaches, and executives, Belichick and Brady is an eye-opening look at the minds, motives, and wild ambitions of two men who have left an indelible mark on the game of football.

Belichick and Brady: Two Men, the Patriots, and How They Revolutionized Football