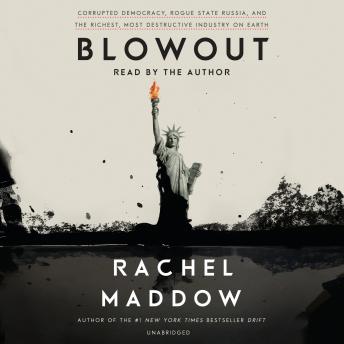 “A rollickingly well-written book, filled with fascinating, exciting, and alarming stories about the impact of the oil and gas industry on the world today.”—The New York Times Book Review

In 2010, the words “earthquake swarm” entered the lexicon in Oklahoma. That same year, a trove of Michael Jackson memorabilia—including his iconic crystal-encrusted white glove—was sold at auction for over $1 million to a guy who was, officially, just the lowly forestry minister of the tiny nation of Equatorial Guinea. And in 2014, Ukrainian revolutionaries raided the palace of their ousted president and found a zoo of peacocks, gilded toilets, and a floating restaurant modeled after a Spanish galleon. Unlikely as it might seem, there is a thread connecting these events, and Rachel Maddow follows it to its crooked source: the unimaginably lucrative and equally corrupting oil and gas industry.

With her trademark black humor, Maddow takes us on a switchback journey around the globe, revealing the greed and incompetence of Big Oil and Gas along the way, and drawing a surprising conclusion about why the Russian government hacked the 2016 U.S. election. She deftly shows how Russia’s rich reserves of crude have, paradoxically, stunted its growth, forcing Putin to maintain his power by spreading Russia’s rot into its rivals, its neighbors, the West’s most important alliances, and the United States. Chevron, BP, and a host of other industry players get their star turn, most notably ExxonMobil and the deceptively well-behaved Rex Tillerson. The oil and gas industry has weakened democracies in developed and developing countries, fouled oceans and rivers, and propped up authoritarian thieves and killers. But being outraged at it is, according to Maddow, “like being indignant when a lion takes down and eats a gazelle. You can’t really blame the lion. It’s in her nature.”

Blowout is a call to contain the lion: to stop subsidizing the wealthiest businesses on earth, to fight for transparency, and to check the influence of the world’s most destructive industry and its enablers. The stakes have never been higher. As Maddow writes, “Democracy either wins this one or disappears.”

This book is fabulous. It’s a great read, as well as being an impressive and comprehensive look at the oil industry AND a fascinating deep dive into Russia’s Putin. As always, Rachel has an easy to follow teaching style without EVER dumbing down complex world issues. As always, I’m grateful to have Rachel Maddow’s comprehensive analysis.

great rendition of the history of oil in world events.

Outstanding in all respects.. sure stirs up some tension over Putin and the oil industry both. The ultimate in grab and to hell with everyone else.

A story in part history, biography, politics, and news analysis. Maddow does her homework to produce the ultimate story of oil, its technology and its personalities in her own unique way. Definitely a book for discussion!

Very informative... helps understand what is at stake in our business and political situations we are in. Only negative is the pages and pages of detail that can overwhelming, but worth working way through it. Same attention needs be paid to banking, realestate, banking, retail, NEWS, and POLITICS.

I have been a fan of Rachel Maddow for years now. I never miss her her show on NSMBC (in podcast form). I love the way she always approaches the daily news from a historical perspective. This book explains the background to the relations between the US, Russia and Europe and why we are where we are today. She has a way of rendering the most unpalatable topics interesting and her quirky sense of humour always has me laughing out loud. I can't wait to read her next book. The narrator - Rachel Maddow herself - is ironic, humorous and cutting - absolutely fantastic!

Research that Rachel did is just like her show - amazing and tight in,

Rachel Maddow is a gifted reporter/analyst of the happenings in our world.

The book was well written. The topic is thoroughly researched. My issue is that the book is too long. It would be a great book if it was a few hours shorter.

I learned so much from this book! Rachel Maddow is one of my absolute heriones! Thank God for such thorough reporting!

This book is so deep, I loved every second of it. I will read it again. I learned so much. Rachel gives you so much information but writes it in a way that's easy to understand.

Not enjoying this book.

Very boring. Author takes 100 words when 10 would be better!

Very informative and interesting. I can't imagine the work that went into weaving it together. Rachel is an excellent narrator. I generally don't listen to audiobooks unless I have a long drive, I prefer to read. However, some of the details of this narrative are quite tedious by necessity. I'm not sure I would have made it through the printed book. I'm glad to have opted for the audio.