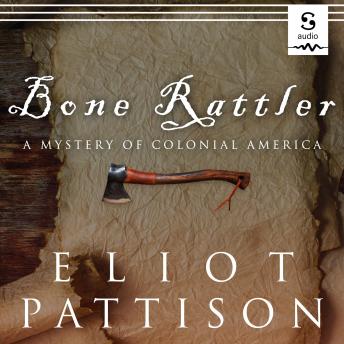 #1 of The Bone Rattler Series

The Edgar Award winner’s acclaimed mystery set in colonial America is “The Last of the Mohicans meets Braveheart, with a curious dash of CSI”. —Entertainment Weekly

Unfairly convicted and force into indentured servitude, young Highland Scot Duncan McCallum finds himself aboard a prisoner ship bound for the New World. A series of mysterious deaths plagues the passengers and claims the life of Duncan’s dear friend Adam Munroe. Enlisted by his captors to investigate, a strange trail of clues leads Duncan into the New World and eventually thrusts him into the bloody maw of the French and Indian War.

Duncan is indentured to the British Lord Ramsey, whose estate in the uncharted New York woodlands is a Heart of Darkness where multiple warring factions–the British, rogue Scots, the French, the Huron, and the Iroquois–are engaged in battle. Exploring a frontier world shrouded in danger, Duncan, the exiled chief of his near-extinct Scottish clan, finds that sometimes justice cannot be reached unless the cultures and spirits of those involved are resolved.

“Having already won an Edgar for his Inspector Shan series, Pattison makes a strong bid for another with this outstanding” first novel in his acclaimed Bone Rattler series. —Publishers Weekly, starred review