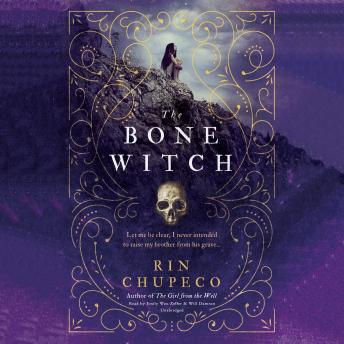 In the captivating start to a new, darkly lyrical fantasy series, Tea can raise the dead, but resurrection comes at a price.
When Tea accidentally resurrects her brother from the dead, she learns she is different from the other witches in her family. Her gift for necromancy means that she's a bone witch, a title that makes her feared and ostracized by her community. But Tea finds solace and guidance with an older, wiser bone witch, who takes Tea and her brother to another land for training.
In her new home, Tea puts all her energy into becoming an asha-one who can wield elemental magic. But dark forces are approaching quickly, and in the face of danger, Tea will have to overcome her obstacles and make a powerful choice.
A Pop Crush Pick of the Most Anticipated YA Titles of 2017. A Publishers Weekly Pick of the Most Anticipated YA Books of Spring 2017. A March 2017 LibraryReads Pick. A Spring 2017 Kids' Indie Next List Pick. An Amazon Best Book of the Month for March 2017. A Bustle Pick of New Young Adult Books for March 2017. A 2017 Shelf Awareness Best Books of the Year selection. A BookRiot Pick of Must-Read YA Books about Witches. A BuzzFeed Books Pick of Underrated Books You Should Read ASAP.