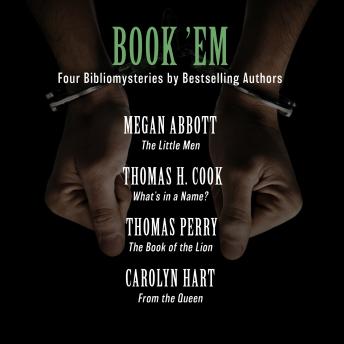 Narrated By: Christina Delaine, Will Damron

The Little Men by Megan Abbott: Rumors and strange experiences lead a washed-up actress in 1950s Hollywood to question the suspicious circumstances surrounding the alleged suicide of a former occupant of her low-rent bungalow.

What's in a Name? by Thomas H. Cook: Rare books dealer and amateur historian Franklin Altman has always wondered how the world might have turned out if the First World War had ended differently. On the fiftieth anniversary of the Armistice Treaty, an ancient German mysteriously appears and presents him with a personal manuscript, the contents of which, he claims, have the power to change history.

The Book of the Lion by Thomas Perry: An anonymous phone call sends Professor Dominic Hallkyn on a mad dash through the streets of Boston in pursuit of a priceless Chaucerian manuscript. But the caller's demands will lead to a devilish plot twist.

From the Queen by Carolyn Hart: When a priceless, first edition of Agatha Christie's Poirot Investigates, autographed and inscribed to the Queen of England, disappears from her South Carolina thrift shop, Ellen Gallagher calls on her friend Annie Darling, owner of the mystery bookstore Death on Demand, to track it down.