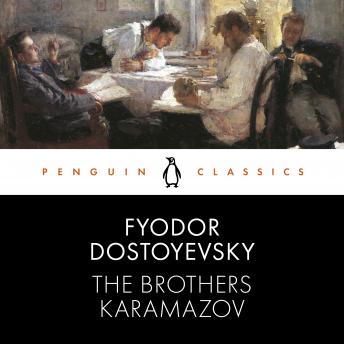 This Penguin Classic is performed by Luke Thompson, best known for his role in the hit Netflix drama Bridgerton. This definitive recording includes an introduction by David McDuff.

The murder of brutal landowner Fyodor Karamazov changes the lives of his sons irrevocably: Mitya, the sensualist, whose bitter rivalry with his father immediately places him under suspicion for parricide; Ivan, the intellectual, driven to breakdown; the spiritual Alyosha, who tries to heal the family's rifts; and the shadowy figure of their bastard half-brother, Smerdyakov. Dostoyevsky's dark masterwork evokes a world where the lines between innocence and corruption, good and evil, blur, and everyone's faith in humanity is tested.

Translated with an Introduction and notes by DAVID McDUFF

'The most magnificent novel ever written' Sigmund Freud

This title is due for release on August 5, 2021
We'll send you an email as soon as it is available!