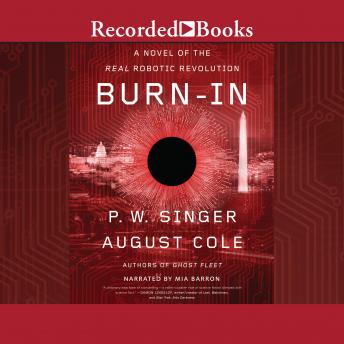 An FBI agent hunts a new kind of terrorist through a Washington, DC, of the
future in this groundbreaking book—at once a gripping techno-thriller and a fact-based tour of tomorrow.

America is on the brink of a revolution, one both technological and political.
The science fiction of AI and robotics has finally come true, but millions are angry
and fearful that the future has left them behind. After narrowly stopping a bombing
at Washington’s Union Station, FBI Special Agent Lara Keegan receives a new
assignment: to field-test an advanced police robot. As a series of shocking catastrophes
unfolds, the two find themselves investigating a conspiracy whose mastermind is using
cutting-edge tech to rip the nation apart. To stop this new breed of terrorist, their only
hope is to forge a new type of partnership.

Burn-In is especially chilling because it is something more than a pulse-pounding
read: every tech, trend, and scene is drawn from real-world research on the ways that
our politics, our economy, and even our family lives will soon be transformed. Blending
a techno-thriller’s excitement with nonfiction’s insight, Singer and Cole illuminate the
darkest corners of the world soon to come.

We liked this book and found it really interesting to listen to on a long drive. The story line moved along easily and there were enough twists and turns that you weren't exactly sure how the protagonist would resolve things. It is set up well for the next in the series and we would listen to that too. The concepts were really interesting ones, especially with the way the challenges the main character faces unfold for the audience.

The storyline could have been worthy of a good book but the dialogue was annoyingly bad. On top of that, the narrator didn't pull it off.

This was an entertaining story. Nothing too deep. Kind of like an “I Robot” type adventure.