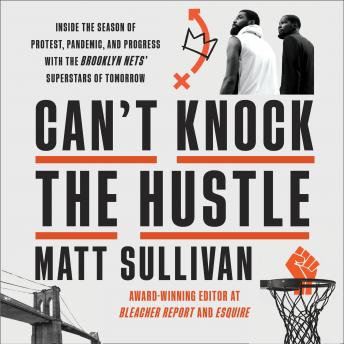 Can't Knock the Hustle: Inside the Season of Protest, Pandemic, and Progress with the Brooklyn Nets' Superstars of Tomorrow

“Brilliantly audacious…written with the profundity of a sage baller and the acuity of a seasoned journalist.”—Kiese Laymon, New York Times bestselling author of Heavy

An award-winning journalist's behind-the-scenes account from the epicenter of sports, social justice, and coronavirus, Can't Knock the Hustle is a lasting chronicle of the historic 2019-2020 NBA season, by way of the notorious Brooklyn Nets and basketball's renaissance as a cultural force beyond the game.

The Nets were already the most intriguing startup in the NBA: a team of influencers, entrepreneurs and activists, starring the controversial Kevin Durant and Kyrie Irving. But this dynasty-in-the-making got disrupted by the unforeseen. One tweet launched an international scandal, pitting the team's Chinese owner and the league's commissioner against its players and LeBron James. The sudden death of Kobe Bryant, after making his final public appearance in Brooklyn, sent shockwaves through a turbulent season.

Then came the unimaginable. A global pandemic and a new civil-rights movement put basketball's trend-setting status to the ultimate test, as business and culture followed the lead of the NBA and its empowered stars. No team intersected with the extremes of 2020 quite like the Brooklyn Nets, and Matt Sullivan had a courtside view.

Can't Knock the Hustle crosses from on the court, where underdogs confront A-listers like Jay-Z and James Harden, to off the court, as players march through the streets of Brooklyn, provoke Donald Trump at the White House, and boycott the NBA's bubble experiment in Disney World.

Hundreds of interviews—with Hall-of-Famers, All-Stars, executives, coaches and power-brokers across the world—provide a backdrop of the NBA's impact on social media, race, politics, health, fashion, fame and fandom, for a portrait of a time when sports brought us back together again, like never before.

Can't Knock the Hustle: Inside the Season of Protest, Pandemic, and Progress with the Brooklyn Nets' Superstars of Tomorrow