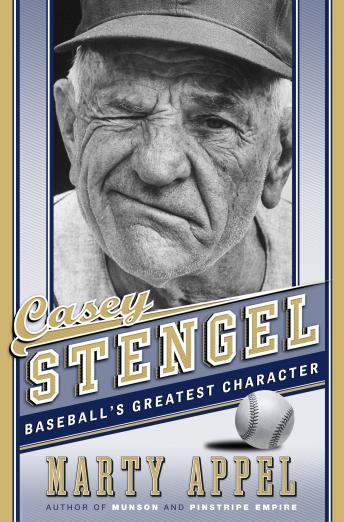 The definitive biography of one of baseball's most enduring and influential characters, from New York Times bestselling author and baseball writer Marty Appel.

As a player, Charles Dillon 'Casey' Stengel's contemporaries included Babe Ruth, Honus Wagner, and Christy Mathewson . . . and he was the only person in history to wear the uniforms of all four New York teams: the Dodgers, Giants, Yankees, and Mets. As a legendary manager, he formed indelible, complicated relationships with Yogi Berra, Joe DiMaggio, Mickey Mantle, and Billy Martin. For more than five glorious decades, Stengel was the undisputed, quirky, hilarious, and beloved face of baseball--and along the way he revolutionized the role of manager while winning a spectactular ten pennants and seven World Series Championships.

But for a man who spent so much of his life in the limelight--an astounding fifty-five years in professional baseball--Stengel remains an enigma. Acclaimed New York Yankees' historian and bestselling author Marty Appel digs into Casey Stengel's quirks and foibles, unearthing a tremendous trove of baseball stories, perspective, and history. Weaving in never-before-published family documents, Appel creates an intimate portrait of a private man who was elected into the Baseball Hall of Fame in 1966 and named 'Baseball's Greatest Character' by MLB Network's Prime 9. Casey Stengel is a biography that will be treasured by fans of our national pastime.