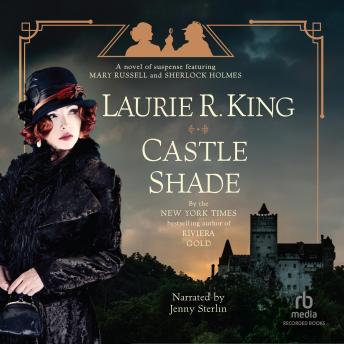 A queen, a castle, a dark and ageless threat--all await Mary Russell and Sherlock Holmes in this chilling new adventure.

The queen is Marie of Roumania: the doubly royal granddaughter to Victoria, Empress of the British Empire, and Alexander II, Tsar of Russia. A famous beauty who was married at seventeen into Roumania's young dynasty, Marie had beguiled the Paris Peace Conference into returning her adopted country's long-lost provinces, single-handedly transforming Roumania from a backwater into a force.

The castle is Bran: a tall, quirky, ancient structure perched on high rocks overlooking the border between Roumania and its newly regained territory of Transylvania. The castle was a gift to Queen Marie, a thanks from her people, and she loves it as she loves her own children.

The threat is...now, that is less clear. Shadowy figures, vague whispers, the fears of girls, dangers that may only be accidents. But this is a land of long memory and hidden corners, a land that had known Vlad the Impaler, a land from whose churchyards the shades creep.

When Queen Marie calls, Mary Russell and Sherlock Holmes are as dubious as they are reluctant. But a young girl is involved, and a beautiful queen. Surely it won't take long to shine light on this unlikely case of what would seem to be strigoi?

Or, as they are known in the West...vampires.