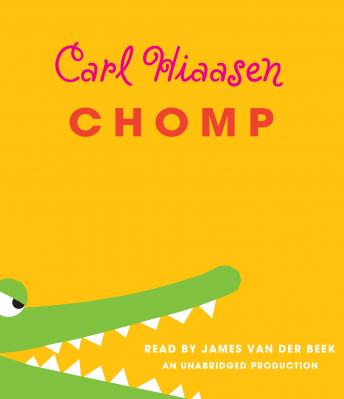 When Wahoo Cray’s dad—a professional animal wrangler—takes a job with a reality TV show called Expedition Survival!, Wahoo figures he'll have to do a bit of wrangling himself to keep his father from killing Derek Badger, the show's inept and egotistical star. But the job keeps getting more complicated: Derek Badger insists on using wild animals for his stunts; and Wahoo's acquired a shadow named Tuna—a girl who's sporting a shiner courtesy of her father and needs a place to hide out.

They've only been on location in the Everglades for a day before Derek gets bitten by a bat and goes missing in a storm. Search parties head out and promptly get lost themselves. And then Tuna's dad shows up with a gun . . .

It's anyone's guess who will actually survive Expedition Survival. . .


“Only in Florida—and in the fiction of its native son Carl Hiaasen—does a dead iguana fall from a palm tree and kill somebody.” —New York Post

“Chomp is a delightful laugh-out-loud sendup of the surreality of TV that will be enjoyed by readers of all ages.” —Los Angeles Times

“Chomp shines in its humorous, subtle tweaks on pop culture. . . . The real satisfaction, however, is not so much in the book’s humor but in its truth.” —Time Out Chicago Kids

We love Carls books. We have listened to Hoot and Flush and loved them. This book was hard to follow, I don't know if it was the narrator or the story line that made us loose interest. Not one of his best but okay.

I love Carl Hiaasen’s kids books. As a 5th grade teacher, “Hoot” is a favorite Project Based Learning unit. “Chomp” had me laughing out loud both when I read the paperback and listening to the audiobook on my drive to school. The wackiness and Mr. Hiaasen’s clear concern about Florida’s creatures and environment make this such a good read. James Van Der Beek’s narration is spot on to how I imagine the narration would be when reading this in paperback. His tempo and consistency is also on the mark.