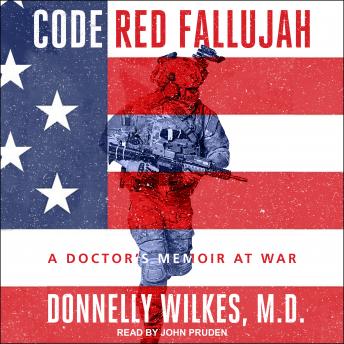 Airstrikes rain down, Gatling guns pound, and snipers lurk in the distance-welcome to the combat aid station of a young doctor embedded with the heavily weaponized First Marines Division as the Battle of Fallujah boils over.

On the night of April 4th, 2004, First Marine Expeditionary Forces launch a major assault on the city of Fallujah. US Navy Lieutenant Donnelly Wilkes's battalion leads the assault into Fallujah as he is positioned with Navy corpsmen and marines at the tactical highway intersection called 'The Cloverleaf.' Rarely have US military physicians been so close to combat in a major conflict as they were in the chaotic, embattled streets of Fallujah-Code Red Fallujah will take you there.

Sharing the harrowing entries from his field diary, Wilkes becomes the first-ever Navy physician to recount the sights and sounds of one of the most violent events of the entire Iraq War. In heart-pounding detail, he divulges his struggles to save wounded warriors amidst rockets landing close enough to knock him off his feet. When Wilkes-fresh out of medical school-is suddenly thrust into this war zone, his skills, his faith, and his ability to endure are all put to the test. Code Red Fallujah is the firsthand narrative of Wilkes's role in the Battle of Fallujah, scintillating combat trauma, and the spiritual challenges that pierced his journey.