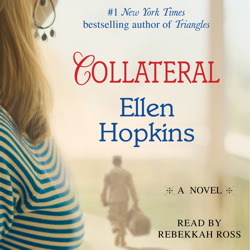 From the New York Times bestselling author of the novel Triangles—a gorgeous, “raw and riveting tale of love and forgiveness” (Publishers Weekly) about a woman torn between her love for a dedicated Marine and her resentment of the war that is tearing their lives apart.

The last thing Ashley ever expected was to end up a military wife. But Cole doesn’t match her stereotype of the aggressive Marine. He’s pas­sionate and romantic, and their relationship evolves into a deeply felt, sexually charged love affair that survives four deployments. Cole desper­ately wants Ashley to marry him, but when she meets another man, a college professor, she begins to see what life might be like outside the shadow of war.

Written in Ellen Hopkins’s stunning poetic verse style, Collateral cap­tures the hearts of the soldiers on the battlefield and the minds of their friends, family, and lovers who also sacrifice their lives and happiness for their country at war. Is the collateral damage worth the fight?

This title is due for release on November 6, 2012
We'll send you an email as soon as it is available!