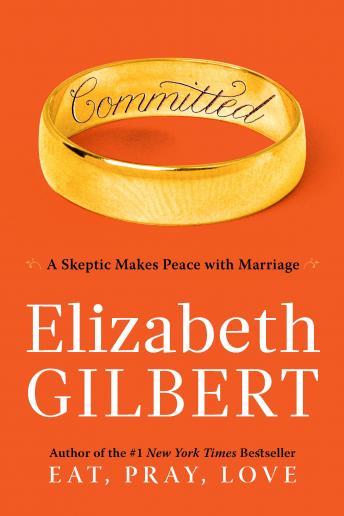 At the end of her bestselling memoir Eat, Pray, Love, Elizabeth Gilbert fell in love with Felipe, a Brazilian-born man of Australian citizenship who'd been living in Indonesia when they met. Resettling in America, the couple swore eternal fidelity to each other, but also swore to never, ever, under any circumstances get legally married. (Both were survivors of previous horrific divorces. Enough said.) But providence intervened one day in the form of the United States government, whichâ€”after unexpectedly detaining Felipe at an American border crossingâ€”gave the couple a choice: they could either get married, or Felipe would never be allowed to enter the country again. Having been effectively sentenced to wed, Gilbert tackled her fears of marriage by delving into this topic completely, trying with all her might to discover through historical research, interviews, and much personal reflection what this stubbornly enduring old institution actually is. Told with Gilbert's trademark wit, intelligence and compassion, Committed attempts to 'turn on all the lights' when it comes to matrimony, frankly examining questions of compatibility, infatuation, fidelity, family tradition, social expectations, divorce risks and humbling responsibilities. Gilbert's memoir is ultimately a clear-eyed celebration of love with all the complexity and consequence that real love, in the real world, actually entails.

As I was exploring my own truth and perspectives about relationships and marriage, I attracted this book. Then I went on a fascinating journey with the author, Elizabeth Gilbert, of her exploration of the history, researches, and her own life journey regarding of marriage. I enjoyed this journey of hers so much that I finished the book in just a few days and didn't want it to end. Elizabeth Gilbert's Narration is as great as her writing. I found now it's harder for me to find a book that I would enjoy as much.

I thoroughly enjoyed listening to this book. Elizabeth Gilbert is one of the very few authors who not only writes superbly but also reads her own work exceptionally well. This was a well researched and written tome on Marriage and relationships. Lyrically written. I wanted the book to go on and on. She carried me through many long hours of LA traffic with ease. Thank you Elizabeth!

If you loved Eat, Pray, Love, you have to listen to this too just to know what happened to Liz. I learned a lot about the history of marriage, which was pretty interesting.

I really enjoyed this book. The author is the narrator, and I like her voice. It is nice to listen to the author of a true story -- it feels like she is telling you the story, not reading someone else's words. The topic of this book is marriage. She tells a lot of interesting details about various marriage customs around the world. She talks a lot about her relationship with her husband. Since I read "Eat, Pray, Love" and know the story of how her relationship with Felipe started, it was really cool to hear where their relationship was going. As a divorced woman myself, it was beneficial to explore some of my own issues with marriage right along with her. I highly recommend this book.

I really enjoyed listening to this book! As a relative newlywed, I could really relate. I would highly recommend for anyone who's married or even thinking of marriage at some points in their life, this provides great perspective. It's particularly powerful that the author narrates. I had not read Eat, Pray, love but I will now after liking Committed so much.

This title is due for release on January 5, 2010
We'll send you an email as soon as it is available!