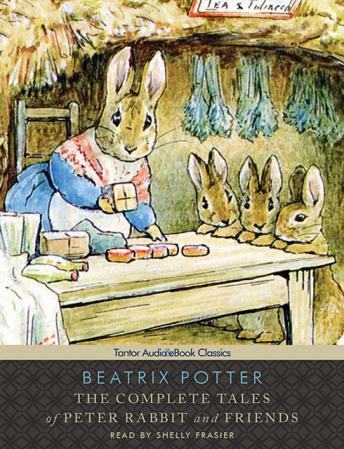 The Complete Tales of Peter Rabbit and Friends

Beatrix Potter's amazing universe of animals dressed in human clothing has taught and entertained children for over a century. This volume brings together twenty of Potter's tales and verses in one book. Hear Peter Rabbit outwit old Mr. McGregor, and Squirrel Nutkin come within a tail's length of being an owl's dinner. Listen as a family of mice save the kind tailor of Gloucester, and as Peter and Benjamin Bunny battle a barn cat. Learn how one fierce rabbit is set on the road to honesty. Although each story stands on its own, several are linked together by events and characters.

The following stories are included in this book:

-'The Tale of Peter Rabbit'

-'The Tale of Squirrel Nutkin'

-'The Tailor of Gloucester'

-'The Tale of Benjamin Bunny'

-'The Tale of Mrs. Tiggy-Winkle'

-'The Tale of Mr. Jeremy Fisher'

-'The Story of a Fierce Bad Rabbit'

-'The Story of Miss Moppet'

-'The Tale of Tom Kitten'

-'The Tale of Jemima Puddle-Duck'

-'The Tale of the Flopsy Bunnies'

-'The Tale of Mrs. Tittlemouse'

-'The Tale of Johnny Town-Mouse'

-'The Pie and the Patty-Pan'

-'The Tale of Pigling Bland'

The world of Beatrix Potter is as appealing now as when it was first created at the turn of the twentieth century.

This title is due for release on July 28, 2008
We'll send you an email as soon as it is available!