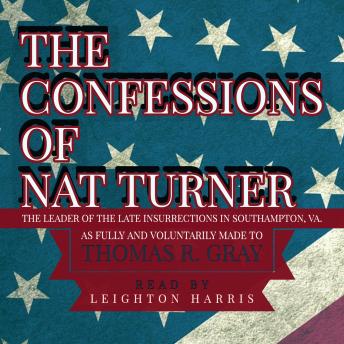 The Confessions of Nat Turner: THE LEADER OF THE LATE INSURRECTIONS IN SOUTHAMPTON, VA. As fully and voluntarily made to THOMAS R. GRAY

The late insurrection in Southampton has greatly excited the public mind, and led to a thousand idle, exaggerated and mischievous reports. It is the first instance in our history of an open rebellion of the slaves, and attended with such atrocious circumstances of cruelty and destruction, as could not fail to leave a deep impression, not only upon the minds of the community where this fearful tragedy was wrought, but throughout every portion of our country, in which this population is to be found. Public curiosity has been on the stretch to understand the origin and progress of this dreadful conspiracy, and the motives which influences its diabolical actors. The insurgent slaves had all been destroyed, or apprehended, tried and executed, (with the exception of the leader,) without revealing any thing at all satisfactory, as to the motives which governed them, or the means by which they expected to accomplish their object. Every thing connected with this sad affair was wrapt in mystery, until Nat Turner, the leader of this ferocious band, whose name has resounded throughout our widely extended empire, was captured.

This title is due for release on February 12, 2021
We'll send you an email as soon as it is available!