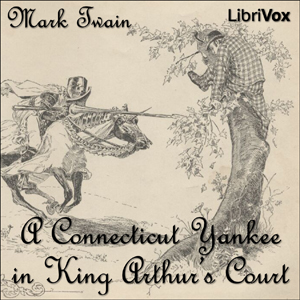 Come and hear the strange tail of The Boss Hank Morgan, a modern day (at the time of publication) Connecticut Yankee who inexplicably finds himself transported to the court of the legendary King Arthur (as the title of the book implies). Hank, or simply, The Boss, as he comes to be most frequently known, quickly uses his modern day knowledge and education to pass himself off as a great magician, to get himself out of all sorts of surprising, (and frequently amusing) situations, as well as to advance the technological and cultural status of the nation in which he finds himself.

In the rather un-subtle sub-text of the story, Twain uses The Boss to express a surprisingly pragmatic and frequently contradictory philosophy. The Boss explores the relative merits of Democracy, and Monarchy, he expresses his views on the “Nature v. Nurture” debate, he frequently speaks forcefully against an established Church, but just as strongly advocates for religion and a variety of churches (just not a compulsory one) and he devotes at least one afternoon to introducing his companions to the concept of inflation. In a far more subtle, yet no less forceful manner, the Boss shares with the reader some views about taxation, slavery (both literal and wage slavery), trade unions, the origins of the German language, the nature of marriage, and probably most powerfully, death.

It is a tall order for a relatively brief text, but Twain manages it all with surprising clarity. No one will agree fully with the Boss on all of these matters, and I would be surprised if Twain himself would. In fact the Boss’s views are so pragmatic, and often contradictory, the reader is left to wonder if Twain himself is alternately speaking through the Boss, and setting him up as a straw man. Either way it is a delightful story and a great piece of American Literature, to say nothing of an excellent argument for education.
(Review written by Steve Andersen)

Narrator is awful. I literally can’t listen to it, he’s completely out of sync. Painful.

This was an interesting book. If you are going to tackle it, be warned that it goes into minute detail in order to better describe the writer's perceptions of life and thoughts during the set time. As well it is best to keep in mind the period of the writing itself. The concept and depiction of the arthurian era is humorous when contrasted with the myth but this is no way comedy. The narrator shows he is capable of imbuing this work with life and character in parts, but has generally kept to a fairly flat cadence in order to, I believe, further stress the storytellers ennui in face of the lack of intellectual stimulation he encounters in those around him.