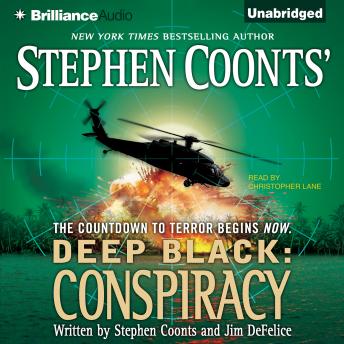 ASSASSINATION
A Secret Service agent is dead, an apparent suicide. A presidential candidate narrowly escapes an assassin’s bullet. And Desk Three, a covert branch of the NSA, is searching for a chilling connection deep inside the Republic of Vietnam.
INTERROGATION
Once, Charlie Dean was a Marine sniper in Quang Nam Province. Today he’s a Deep Black operator, returning to Vietnam to find the source of some threatening e-mail. Instead, he comes face to face with a man he once hunted down…and thought he had killed.
FEAR FOR THE NATION…
Back in the U.S., Deep Black agent Lia DeFrancesca has uncovered the trail of a killer in Dean’s path. Now, with every asset, weapon, bug and high-tech magic wand Desk Three can wave, the agents enter a terrifying global race against time. Because ghosts of the past have risen to life…to strike a death blow at the heart of the U.S.A.
“Coonts knows how to write and build suspense.” – The New York Times Book Review

This title is due for release on June 3, 2008
We'll send you an email as soon as it is available!