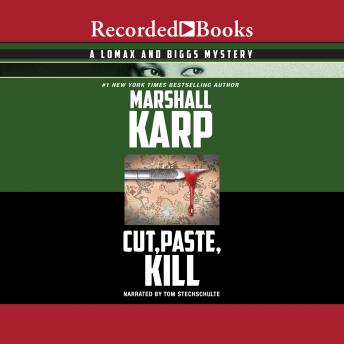 An ex-writer/producer for television, Marshall Karp is the bestselling author of three hit Lomax and Biggs mysteries, including the uproarious series debut, The Rabbit Factory. Booklist hails their fourth adventure as possibly the first "hardboiled scrapbooking mystery." LAPD detectives Mike Lomax and Terry Biggs have their work cut out for themselves this time. A killer bent on dispensing justice to those who have evaded criminal prosecution is on the loose, and the bodies are stacking up. The only clue at the scene of each crime is an elaborate scrapbook that contains meticulously detailed accounts of the victims' crimes. As luck would have it, Lomax and Biggs' hunt for the killer leads them to a scrapbooking inmate eager to cut a deal. But could she be leading them down a garden path? A deft blend of police procedural and buddy comedy, Cut, Paste, Kill finds Karp in top form. Narrator Tom Stechschulte doesn't miss a beat while delivering Karp's taut, quick-witted dialogue.

This title is due for release on March 4, 2011
We'll send you an email as soon as it is available!