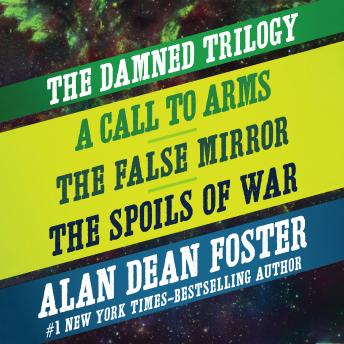 The Damned Trilogy: A Call to Arms, The False Mirror, and The Spoils of War

Humans are caught up in an alien war in this epic from the #1 New York Times–bestselling author of Star Wars: The Force Awakens and Star Trek Into Darkness.
For millennia, the Weave, an alliance of species, have fought to resist the telepathic Amplitur, who strive to unite all self-aware life-forms in their great 'Purpose.' The Weave is slowly losing ground, but for both sides, warfare focuses more on outthinking and outmaneuvering your foe than destruction. In fact, most regard violence as hideously barbaric, and even the thought of harming another sentient being is beyond imagining.
Then they come to Earth . . .
A Call to Arms
When one of its scout ships lands on Earth, the Weave quickly realizes that humanity's almost innate ability to wreak havoc and death may hold the key to turning the tide in their fight. Unfortunately for all, the Amplitur have the same idea—and mankind is caught in the middle.
The False Mirror
When the Amplitur unleash an elite cadre of fighters, it soon becomes clear that they have subjected their human prisoners to horrific genetic manipulation. But if the Weave attempts to undo the effects, they may change the former warriors into something far, far worse.
The Spoils of War
With mankind's help, the Weave is finally on the verge of victory against the Amplitur. Until an alien scholar uncovers a terrifying truth: Earthlings might not even be capable of being civilized—and a shadowy group of powerful humans is already poised to unleash war across the entire galaxy.

Damned Trilogy: A Call to Arms, The False Mirror, and The Spoils of War