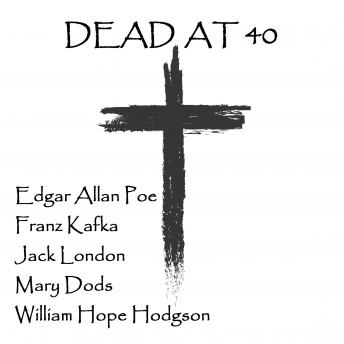 Science, better diet, advanced medicines are all part of a process that in the modern age keep most of us going to a ripe old age.In previous times some diseases could only be slowed and not defeated. There toil of relentless attack on our physical forms brought misery and decay. Add to this that within our number some will self-destruct, demons will pursue their inner thoughts and life will be too painful to bear. Some may shuffle off the mortal coil for no discernible reason, but life will end early, they will not take up their three-score year and ten.In this collection of short stories some of our most popular and well-known authors are grouped together with an unfortunate tag: dead at 40.These authors are not run-of-the-mill or ten a penny; many are literary leviathans who left enduring works of literature and sadly may have left us many more had they lived. We will never know.Death for these authors was usually due to many health issues but primarily:-Edgar Allan Poe - Several causes have been given but, in truth, it remains a mystery.Franz Kafka - TuberculosisJack London - Dysentery, late-stage alcoholism, and uremiaMary Dods (writing as David Lyndsey) - Liver disease William Hope Hodgson - Killed at the Fourth Battle of Ypres in World War 101 - Dead at 40 - An Introduction02 - The Pit and the Pendulum by Edgar Allan Poe03 - In the Penal Colony by Franz Kafka04 - To Build a Fire by Jack London05 - The Prediction by Mary Diana Dods writing as David Lyndsey06 - Carnacki, The Ghost Finder - No1 - The Gateway of the Monster by William Hope Hodgson