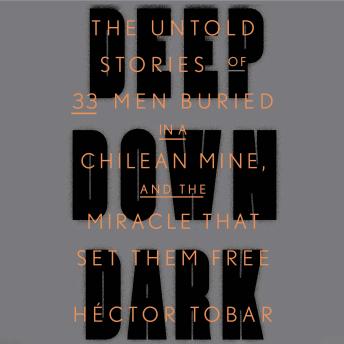 Deep Down Dark: The Untold Stories of 33 Men Buried in a Chilean Mine, and the Miracle That Set Them Free

The exclusive, official story of the survival, faith, and family of Chile's thirty-three trapped miners
When the San José mine collapsed outside of Copiapó, Chile, in August 2010, it trapped thirty-three miners beneath thousands of feet of rock for a record-breaking sixty-nine days. Across the globe, we sat riveted to television and computer screens as journalists flocked to the Atacama desert. While we saw what transpired above ground during the grueling and protracted rescue, the story of the miners' experiences below the earth's surface-and the lives that led them there-hasn't been heard until now.
In Deep Down Dark, a master work by a Pulitzer Prize-winning journalist, Héctor Tobar gains exclusive access to the miners and their stories. The result is a miraculous and emotionally textured account of the thirty-three men who came to think of the San José mine as a kind of coffin, as a 'cave' inflicting constant and thundering aural torment, and as a church where they sought redemption through prayer while the world watched from above. It offers an understanding of the families and personal histories that brought 'los 33' to the mine, and the mystical and spiritual elements that surrounded working in such a dangerous place.

Deep Down Dark: The Untold Stories of 33 Men Buried in a Chilean Mine, and the Miracle That Set Them Free