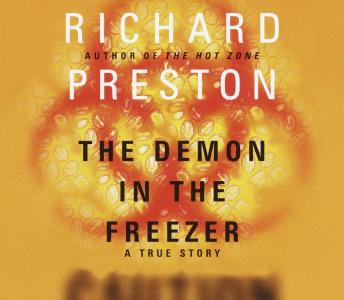 The Demon in the Freezer: A True Story

“The bard of biological weapons captures the drama of the front lines.”—Richard Danzig, former secretary of the navy

The first major bioterror event in the United States-the anthrax attacks in October 2001-was a clarion call for scientists who work with “hot” agents to find ways of protecting civilian populations against biological weapons. In The Demon in the Freezer, his first nonfiction book since The Hot Zone, a #1 New York Times bestseller, Richard Preston takes us into the heart of Usamriid, the United States Army Medical Research Institute of Infectious Diseases at Fort Detrick, Maryland, once the headquarters of the U.S. biological weapons program and now the epicenter of national biodefense.

Peter Jahrling, the top scientist at Usamriid, a wry virologist who cut his teeth on Ebola, one of the world’s most lethal emerging viruses, has ORCON security clearance that gives him access to top secret information on bioweapons. His most urgent priority is to develop a drug that will take on smallpox-and win. Eradicated from the planet in 1979 in one of the great triumphs of modern science, the smallpox virus now resides, officially, in only two high-security freezers-at the Centers for Disease Control in Atlanta and in Siberia, at a Russian virology institute called Vector. But the demon in the freezer has been set loose. It is almost certain that illegal stocks are in the possession of hostile states, including Iraq and North Korea. Jahrling is haunted by the thought that biologists in secret labs are using genetic engineering to create a new superpox virus, a smallpox resistant to all vaccines.

Usamriid went into a state of Delta Alert on September 11 and activated its emergency response teams when the first anthrax letters were opened in New York and Washington, D.C. Preston reports, in unprecedented detail, on the government’ s response to the attacks and takes us into the ongoing FBI investigation. His story is based on interviews with top-level FBI agents and with Dr. Steven Hatfill.

Jahrling is leading a team of scientists doing controversial experiments with live smallpox virus at CDC. Preston takes us into the lab where Jahrling is reawakening smallpox and explains, with cool and devastating precision, what may be at stake if his last bold experiment fails.

I came for the science but I was almost suffocated by unnecessary personal BS. It’s obvious why America farms out its gain of function research to less scrupulous countries like, e.g., China. It’s a pity we can’t learn how to weaponize viruses from Russia; their decades of work with smallpox would be useful were it not so frightening. Our scientists and politicians took them at face value when they denied doing what they were so obviously doing … until they could no longer accept their obfuscations. The overwhelming stupidity of American scientists is breathtaking. Same goes for the government — that means you, FBI! I wanted to learn about the weaponization of smallpox, but I had to suffer through individual stories to do so. It seems like the author was being paid by the word, there were so darned many. The author was adequate; he lowered himself to the material he was given.

Authors made a chilling case for smallpox as the most dangerous biological weapon. Author described actual incidents and leaves you wondering who or what is going to use the virus in the U.S. Well read - easy to listen to.

This is an incredibly interesting book! I learned so much! It is frightening to think this could happen to the world some day!

Demon in the Freezer contains some very interesting information about anthrax, smallpox and other horrible diseases. It offers details about what happens when a human being contracts one of these diseases. At times it is disgusting, but the disgusting portions are punctuated with long episodes of tedium. My biggest complaint is that it tends to wander from one story to another without coming to a conclusion. There is quite a lot of scientific data that is explained in excruciating detail - far to technical for my simple mind. This book was not what I expected it to be.

I work in Public Health and this was interesting to me for that reason. We have had drills if there were an outbreak of small pox. Alot of history and technical items.

This title is due for release on May 13, 2002
We'll send you an email as soon as it is available!