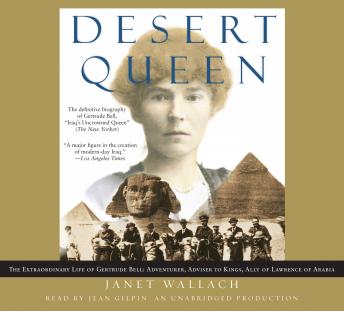 Turning her back on her privileged life in Victorian England, Gertrude Bell (1868-1926), fired by her innate curiosity, journeyed the world and became fascinated with all things Arab. Traveling the length and breadth of the Arab region, armed with a love for its language and its people, she not only produced several enormously popular books based on her experiences but became instrumental to the British foreign office. When World War I erupted, and the British needed the loyalty of the Arab leaders, it was Gertrude Bell's work and connections that helped provided the brain for T. E. Lawrence's military brawn. After the war she participated in both the Paris and Cairo conferences, played a major role in creating the modern Middle East, and was generally considered the most powerful woman in the British Empire.

In this incident-packed biography, Janet Wallach reveals a woman whose achievements and independent spirit were especially remarkable for her times, and who brought the same passion and intensity to her explorations as she did to her rich romantic life. Too long eclipsed by Lawrence's fame, Gertrude Bell emerges in this first major biography as a woman whose accomplishments rank as crucial to world history (especially in light of the continuing geopolitical importance of the Middle East) and whose life was a grand adventure.

This title is due for release on September 4, 2012
We'll send you an email as soon as it is available!