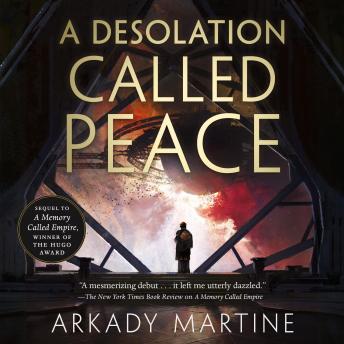 '[An] all around brilliant space opera, I absolutely love it.'—Ann Leckie, on A Memory Called Empire

An alien armada lurks on the edges of Teixcalaanli space. No one can communicate with it, no one can destroy it, and Fleet Captain Nine Hibiscus is running out of options.

In a desperate attempt at diplomacy with the mysterious invaders, the fleet captain has sent for a diplomatic envoy. Now Mahit Dzmare and Three Seagrass—still reeling from the recent upheaval in the Empire—face the impossible task of trying to communicate with a hostile entity.

Their failure will guarantee millions of deaths in an endless war. Their success might prevent Teixcalaan’s destruction—and allow the empire to continue its rapacious expansion.

A brilliant exercise of political intrigue in a thorough science-fiction setting. A story that deserves rapt attention. The narrator starts a little flat but gets better with each chapter, as does the story itself.

My only complaint with the writing is that the internal "will they, won't they" dialogue between the two female protagonists is exhausting and far overdone. It reminds me of some other book series which tries too hard to create drama where it just doesn't fit naturally. It's fine, and I still enjoyed the story, but my very amateur critique is that about 1/2 to 3/4 of the inner monologue relating to it is simply not necessary and actively distracts from the story. If you honestly want the reader to think that they "won't" and then have them hook up eventually, then introduce some alternate possibilities. The first book does this very well by never revealing the gender/sex preference of 3 Seagrass and it leaves the reader wondering if her and 12 Azalea were going to hook up. Once that ship sailed, trying to convince the reader otherwise is just a waste of time unless there's actually something else going on and not just "why doesn't she notice me."