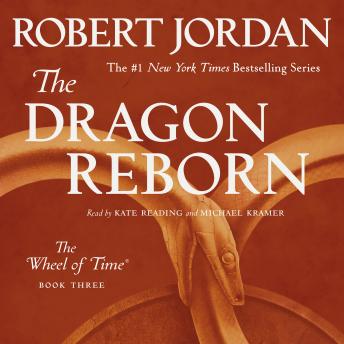 The Dragon Reborn: Book Three of 'The Wheel of Time'

In The Dragon Reborn, the third novel in Robert Jordan’s #1 New York Times bestselling epic fantasy series, The Wheel of Time®, Rand al’Thor undertakes a journey to prove himself worthy of being the Champion of Light.

Winter has stopped the war—almost—yet men are dying, calling out for the Dragon. But where is he?

Rand al’Thor has been proclaimed the Dragon Reborn. Traveling to the great fortress known as the Stone of Tear, he plans to find the sword Callandor, which can only be wielded by the Champion of Light, and discover if he truly is destined to battle The Dark One. Following Rand, Moiraine and their friends battle Darkhounds on the hunt, hoping they reach the Heart of the Stone in time for the next great test awaiting the Dragon Reborn.

Great book, excellent narration. Skips at a few points, but not a big deal.

Gave it 4 stars only bc even though I downloaded the book it skipped and in places also sounded garbled. Other than that I Really like this series. Lots of character, lots of action, good way to lose oneself. The narration is excellent.

This is a very good book. I did enjoy the narrators, they were very good. Glad they are the same ones from the first 2 books. Looking forward to the next book!

I loved this book!! It had great narrative, and they did a great job bringing it to audio!

Good book, great series, only wish that there was more than two narrators.

This was my first audiobook. And I am glad that it was this book! Robert Jordan has created such a vivid, lively world that you can just see yourself inside of this world! Great voice work as well!

Great Book draws you in. Awesome characters that make you wanting more

Great book that expands to include narratives some of the other characters. Definitely a good read for anyone already started on the series.

we all can relate to wanting to grow up fast and see new things...but as time goes on you find the best adventures were in your own backyard...

I am lost. Lost in an elaborate world of sorrow and bliss. An amazing reading and story that just get better, book by book.

I really enjoyed the narrators reading this book they really did a great job and u am very pleased. I can not wait to listen to the next book in the series!

Having heard about this series all my life and having decided to give it a try, this third book is really wearing down my resolve. It continues with the over the top sexism. The female characters are truly bizarre. While I suppose he should be given some credit to have included woman at all - compared to contemporary fantasy authors, this is really pushing the border if no representation is not better than terrible representation. Jordan has taken the tactics and strategies that woman use to gain power in societies were they are powerless and applied that to a world where - he tells us - they do hold the power. You’d expect that an author who proposes to make gender dynamics a central theme would have at least skimmed through some of the relevant academic works of the day.

Just finished the third book and I'm thoroughly impressed! I love how this book didn't center on Rand and developed the other characters.

Enjoying this series. Fun characters fun story. I'm a little disappointed in the fact that it doesn't go into depth about anyone's training. How they do different this with the one power. The title is the dragon reborn but Rand isn't really in the book all that much.

loved it. keeps me awake while driving.

The narrators do a great job of defining the characters. The series is awesome.

This one was my favorite in the series so far. Loved it and the introduction of new characters.

Again a little slow to get to the better parts of the story, but another excellent read.

Love this book. I have read it close to ten times but this is the first time to listen to it on audio book. Narration is great. Switching male and female voice depending on the chapter is a nice addition.

one of my favorites out of the series

I have no clue where this is gonna go and I can't wait!

I enjoy this series. Narration is OK, woman is better than the man. The put on good voices, but pay little attention to mood.

Liked the way it keep up with each plot line. I miss more story telling for what Rand went through the journey that's the main reason for 4 stars instead of 5. The narrators impecable as the 2 books before, keeping the voice of the characters all this time.

My little sister read this one first.

Perfect all the way

another great book in the wheel of time

I grew up on this series and it just takes me back. Robert Jordan is my favorite author.

Couldn't wait to listen to the next chapter.

I find Kate Readings voice quite tiresome and boring. Kramer rocks though.

I have come to love all of Robert Jordan's books. The Narrators are reading them in a way that keeps the books interesting to listen to.

Book Three is just as good as the first two and well worth it!

love this series as my traveling companion. the miles melt away as I listen to the story. much easier to listen than read. i don't skip through all the lengthy descriptions.

The narrators do a fantastic job. Glad they kept the same ones throughout the series!

This is a great chapter in the installment of the wheel of time series. This book takes more of its time to progress and give more to Perrin, Mat, and Egwene and the other girls. It finishes on a high note but does so in a way that makes you want to know more. Only issue it had was a few skips but they were minor and low in number happening. No where near as bad as some other sites

This title is due for release on November 1, 2004
We'll send you an email as soon as it is available!