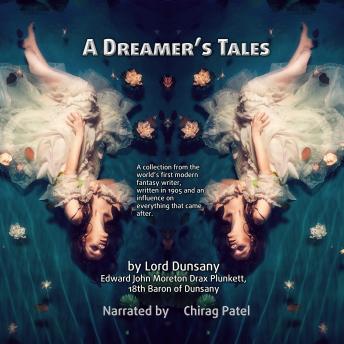 A Dreamer's Tales: A collection from the world’s first modern fantasy writer, written in 1905 and an influence on everything that came after.

Lord Dunsany was the most influential writer in the genre that came to be known as fantasy, which his stories set trends for that continue to this day.

Before him, the closest thing to fantasy that existed was folktales; after him, people built worlds beyond imagining and epic stories in the lands he first explored.

He was an influence on Tolkien, Lovecraft, Gaiman, Borges, Clarke, Moorcock, Yeats, Le Guin and many more besides. Worlds of monsters and magic, of strange names and stranger tales, were all born in Dunsany’s work.

Contained herein are tales of mysteries and monsters, deserted cities and dangerous dreams, of war between the gods and men who are not all they seem.

In this collection you’ll find sixteen stories from the first and greatest master of the fantasy genre.

Dreamer's Tales: A collection from the world’s first modern fantasy writer, written in 1905 and an influence on everything that came after.

This title is due for release on February 29, 2020
We'll send you an email as soon as it is available!