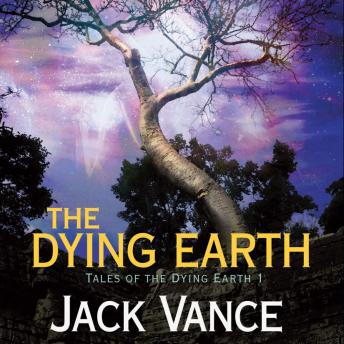 #1 of Tales of the Dying Earth

The stories included in The Dying Earth introduce dozens of seekers of wisdom and beauty, lovely lost women, wizards of every shade of eccentricity with their runic amulets and spells. We meet the melancholy deodands, who feed on human flesh and the twk-men, who ride dragonflies and trade information for salt. There are monsters and demons. Each being is morally ambiguous: The evil are charming, the good are dangerous. All are at home in Vance’s lyrically described fantastic landscapes like Embelyon where, “The sky [was] a mesh of vast ripples and cross-ripples and these refracted a thousand shafts of colored light, rays which in mid-air wove wondrous laces, rainbow nets, in all the jewel hues....” The dying Earth itself is otherworldly: “A dark blue sky, an ancient sun.... Nothing of Earth was raw or harsh—the ground, the trees, the rock ledge protruding from the meadow; all these had been worked upon, smoothed, aged, mellowed. The light from the sun, though dim, was rich and invested every object of the land...with a sense of lore and ancient recollection.” Welcome.“The Dying Earth and its sequels comprise one of the most powerful fantasy/science-fiction concepts in the history of the genre. They are packed with adventure but also with ideas, and the vision of uncounted human civilizations stacked one atop another like layers in a phyllo pastry thrills even as it induces a sense of awe [at]...the fragility and transience of all things, the nobility of humanity’s struggle against the certainty of an entropic resolution.” —Dean Koontz, author of the Odd Thomas novels“He gives you glimpses of entire worlds with just perfectly turned language. If he’d been born south of the border, he’d be up for a Nobel Prize.” —Dan Simmons author of The Hyperion Cantos

The book just could not keep my interest.

This title is due for release on February 15, 2010
We'll send you an email as soon as it is available!