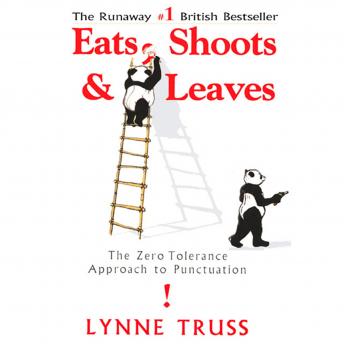 In 2002 Lynne Truss presented Cutting a Dash, a well-received BBC Radio 4 series about punctuation, which led to the writing of Eats, Shoots & Leaves. The book became a runaway success in the UK, hitting number one on the bestseller lists and prompting extraordinary headlines such as Grammar Book Tops Bestseller List (BBC News). With more than 500,000 copies of her book in print in her native England, Lynne Truss is ready to rally the troops on this side of the pond with her rousing cry, Sticklers unite!Through sloppy usage and low standards on the Internet, in e-mail, and now text messages, we have made proper punctuation an endangered species. In Eats, Shoots & Leaves, former editor Lynne Truss dares to say, in her delightfully urbane, witty and very English way, that it is time to look at our commas and semicolons and see them as the wonderful and necessary things they are. If there are only pedants left who care, then so be it. This is a book for people who love punctuation and get upset when it is mishandled. From George Orwell shunning the semicolon, to New Yorker editor Harold Ross's epic arguments with James Thurber over commas, this lively history makes a powerful case for the preservation of a system of printing conventions that is much too subtle to be mucked about with.

Like many others, I didn't read the small note at the bottom of the book description listing this as part of a British radio program inspired by the book. And so, like many others, I was totally disappointed. Evidently the book is not available as an unabridged audio on CD.

This isn't the book -- it's excerpts from the radio programs on which the book was based. Very much false advertising!!

I guess I need to read some more about punctuation, but I still don't get the semi-colon. I have recently tried out the semi-colon and I just don't like using it. I will just continue to write two sentances...

Hated it. What a waste. Who cares. Maybe this is better as a hardcover book, but in audio form it just doesn't work.

Quite entertaining foray into grammar. I had no trouble listening to the reader's beautiful British accent and was engaged throughout. But it ended too soon.

Not what I expected. This CD contains excerpts from a British radio show concerning grammar and punctuation. Short, hard to hear some portions. The concept is a little funnier than the reality.

I had seen this book on the best seller list for quite some time and was intrigued. The book was not what I had expected. It was entertaining enough (loved the panda joke which was the highlight for me) but not a very lengthy CD.

I was a bit disappointed with this CD. It was very short and the radio show host, Ms. Truss, was quite hard to understand. The concept is good and I enjoyed taking away a bit of trivia. I wish I could have liked this more.

I liked the concepts, but reader was hard to follow with the accent...

Wish I had had the opportunity to learn grammar this way in school. It's more fun to listen to than you think it will be.

Enjoyable enough but too short. I would have like to hear more of the BBC radio programs and possibly learned a thing or two!

Not even correct punctuation can save this one! After reading the summary I couldn't wait for this title, but boy, what a stinker! Listenability: 1 out of 10. I could barely understand a word Ms. Truss was saying. A pro certainly would have been in order. Content: 2. In no way lived up to its billing. Techinal: 1. The poor sound and on-the-street interviews were horrid! Value: 3 for some interesting trivial content-Ugh!. 7 JOHNNIES out of 40 and 1 star. Just say no.

I enjoyed this very much. It is nice to get your grammar with a little humor too.

As someone who abhors the misuse of the apostrophe, I found this both hilarious and affirming. What I found here were refreshing, humorous explanations of the evoloution of punctuation misuse. And I learned a few things too!

I loved this lighthearted and beguiling audiobook, which consists of the radio segments upon which the bestselling book was based. Who would think that grammar could be so entertaining? The author's voice is inviting and appropriately ironic at times...the audio book brightened the days I listened to it and when I have time to read the paper book I think I will have gained by having listened to her voice Highly recommended!

This title is due for release on September 25, 2004
We'll send you an email as soon as it is available!