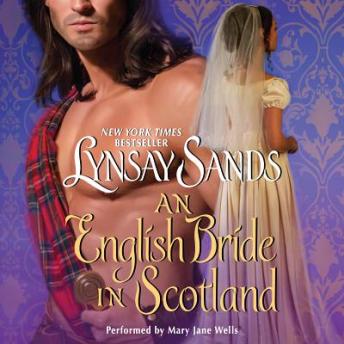 An English Bride in Scotland

From New York Times bestselling author of The Husband Hunt, The Heiress, and other beloved historical romances, comes Lynsay Sands’s An English Bride in Scotland, the first book in a new series set in the wilds of the Highlands.

Annabel had planned to become a nun. But when her mother arrives at the Abbey to bring her home to marry a Scottish laird—her runaway sister’s intended husband—her life takes a decidedly different turn.

And though Annabel isn’t the wife he’d planned for, strong, sexy Ross McKay is taken with his shy, sweet bride.

Annabel knows nothing about being a wife, running a castle—or the marriage bed. But her handsome new husband makes her want to learn. When Annabel’s life is threatened, Ross vows to move the highlands itself to save her and preserve the passion that’s only beginning to bloom.

This title is due for release on June 25, 2013
We'll send you an email as soon as it is available!