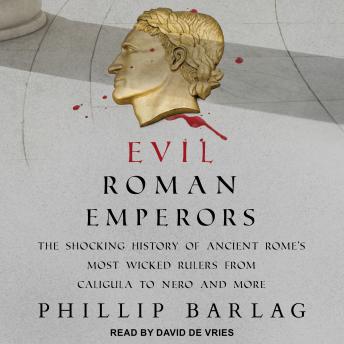 Evil Roman Emperors: The Shocking History of Ancient Rome's Most Wicked Rulers from Caligula to Nero and More

Nero fiddled while Rome burned. As catchy as that aphorism is, it's sadly untrue, even if it has a nice ring to it. The one thing Nero is well-known for is the one thing he actually didn't do. But fear not, the truth of his life, his rule and what he did with unrestrained power, is plenty weird, salacious and horrifying.

And he is not alone. Roman history, from the very foundation of the city, is replete with people and stories that shock our modern sensibilities. Evil Roman Emperors puts the worst of Rome's rulers in one place and offers a review of their lives and a historical context for what made them into what they became.

Lucius Tarquinius Suburbus called peace conferences with warring states, only to slaughter foreign leaders; Commodus sold offices of the empire to the highest bidder; Caligula demanded to be worshipped as a god; even the Roman Senate itself was made up of oppressors, exploiters, and murderers of all stripes.

Roman history, deviant or otherwise, is a subject of endless fascination. What's never been done before is to look at the worst of the worst at the same time, comparing them side by side, and ranking them against one another. Until now.

Evil Roman Emperors: The Shocking History of Ancient Rome's Most Wicked Rulers from Caligula to Nero and More