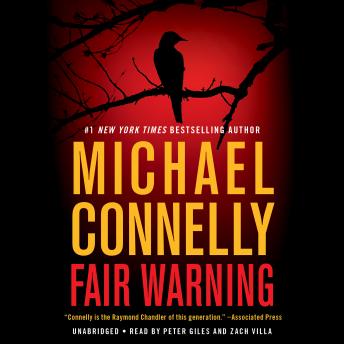 The hero of The Poet and The Scarecrow is back in this thriller from #1 New York Times bestselling author Michael Connelly. Jack McEvoy, the journalist who never backs down, tracks a serial killer who has been operating completely under the radar—until now.

Veteran reporter Jack McEvoy has taken down killers before, but when a woman he had a one-night stand with is murdered in a particularly brutal way, McEvoy realizes he might be facing a criminal mind unlike any he's ever encountered.

Jack investigates—against the warnings of the police and his own editor—and makes a shocking discovery that connects the crime to other mysterious deaths across the country. Undetected by law enforcement, a vicious killer has been hunting women, using genetic data to select and stalk his targets.

Uncovering the murkiest corners of the dark web, Jack races to find and protect the last source who can lead him to his quarry. But the killer has already chosen his next target, and he's ready to strike.

Terrifying and unputdownable, Fair Warning shows once again why "Michael Connelly has earned his place in the pantheon of great crime fiction writers" (Chicago Sun-Times).

I liked The Poet and The Scarecrow slightly more. Good listen.

It’s ok. It held my attention enough to finish the book.

a very good story. It looks like more to come with this character

very well written, one of the best books he have wrote

Great book, probably the best, and I’ve read LOTS of his books. Narrator was excellent as well. Eagerly awaiting next book.

Another great story... also loved listening to this narrator, he does a great job with the storylines. This author is one of my favorites.

Good read but not his best

Michael Connelly once again does not disappoint.

Great story. L had a hard time leaving the book long enough to sleep . Besides being a great topic it was also very informing and a real warning. I would definitely recommend the story to everyone!

Great book and storytelling, can’t wait for his next book .

u love Connolly and found this very current. I only read authors I know.

Great read. The characters were well developed in the first book of the series the plot was excellent, I am not a science fiction fan but there is just enough reality to make it almost believable, great narrator.