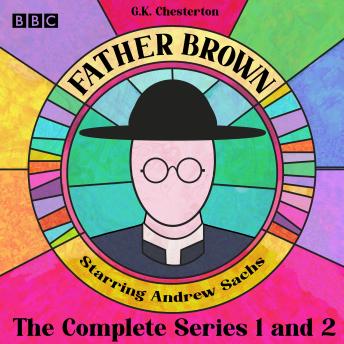 Andrew Sachs stars as G.K. Chesterton's crime-solving cleric, whose unlikely methods make him one of the great heroes of the Golden Age of Detective Fiction

With his black hat, huge umbrella, unworldly simplicity and 'beaming but breathless geniality', Father Brown is one of fiction's best-loved amateur detectives. Short and tatty, but with the wisdom and insight to unravel the most wayward of criminal minds, he has entertained generations.

In this collection of 13 full-cast dramatisations, the High Priest of detection becomes involved in seven intriguing cases that will tax even his mental powers to the limit. The episodes are:

Also included in this collection is a bonus documentary programme, The Mystery of Father Brown, in which Ann Widdecombe explores the enduring impact of the shambolic priest, and looks into the life of his creator G.K. Chesterton.

Dramatised by John Scotney and produced by Alec Reid.

This title is due for release on May 20, 2021
We'll send you an email as soon as it is available!