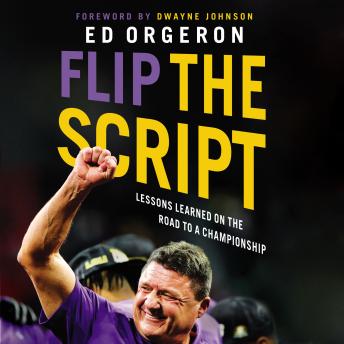 Flip the Script: Lessons Learned on the Road to a Championship

The path to success is never easy. In Flip the Script you will learn the life-changing lessons of leadership and determination Coach O discovered on the road to a championship.

Ed Orgeron, head coach of the record-breaking national champion LSU Tigers football team, tells the inspiring story of reversing the team's fortunes and culture, as well as his own remarkable leadership journey from disappointment and setback to the apex of college sports.

The storybook football season for the LSU Tigers in 2019 was the stuff of legend: a team with recently unmet expectations became the undefeated national champion with a Heisman trophy-winning transfer quarterback under the leadership of a coach whose previous coaching stops had been disappointments. Yet that coach, Ed Orgeron, had turned everything around. He flipped the script, transforming a program that lately had not reached its potential into a team of unprecedented dominance. Flip the Script is the story of how it happened, with lessons for anyone who wants to succeed. Telling the story of his own journey that culminated in the Cinderella season, Orgeron highlights the traits he learned are necessary for success:


- an ability and willingness to learn from mistakes,
- the necessity of perseverance,
- recognizing and focusing on what you’re truly good at,
- building unity, and
- overcoming hardship.

The road to success is never easy, as Ed Orgeron's life reveals. But his life also shows that with determination and a willingness to learn from experience, your trajectory can change--your script can be flipped--and you can achieve more than you ever dreamed.

Flip the Script: Lessons Learned on the Road to a Championship